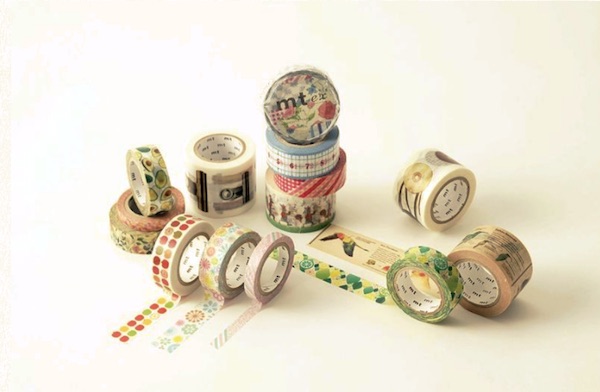 It’s fun to get stuck on masking tape

In this column, I want to talk about masking tape. You may be wondering what connection masking tape and Okayama Prefecture have. Well, the mt brand masking tape, which is quite popular among women, is produced by Kurashiki-based Kamoi Kakoshi Co. Masking tape is easy both to apply and remove. It is so convenient and comes in so many decorative patterns that I have loved using this tape since I was a young child.
photo by the-japan-news.com photo by the-japan-news.com 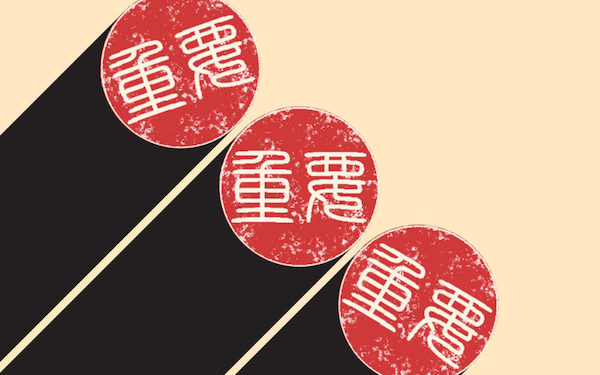 Sealing the Deal: The Importance of the Hanko

Japan is often considered the zenith of technologically advanced nations, but most of Japan’s government and companies rely on plain old pen and paper and in-person handling. Thus, if you live in or operate in Japan, you may quickly recognize the importance of the hanko (seal). The hanko is a small stamp with a personal seal used for signing documents and contracts. Hanko are also referred to interchangeably as inkan, which is the mark left on the page. For foreigners, the importance of having a hanko is debatable. You might live here for years without ever being asked for your seal and will instead sign with your signature
photo by gaijinpot.com photo by gaijinpot.com 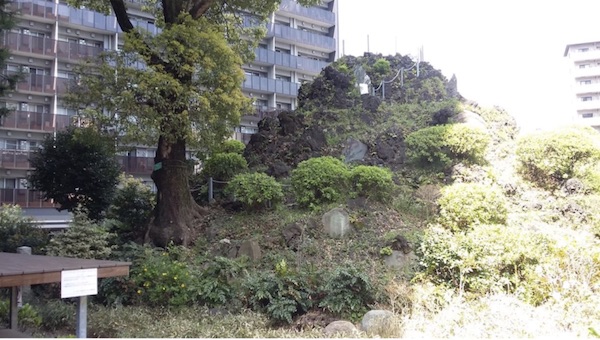 Mount Fuji has always been regarded as a sacred mountain, but for much of their history, the Japanese have been content to admire the iconic peak from afar. The only people interested in actually climbing it were the mountain-loving followers of Shugendo, (修験道 "the way of self-discipline"), a sect of mountain ascetics. However, in the early years of the Edo period (1603–1868), a cult called Fujiko (富士講) arose around the mountain. It was founded by a Shinto priest called Hasegawa Kakugyo (1541–1646), and it turned the ascent of Mount Fuji into a religious rite and duty.
photo by japantoday.com photo by japantoday.com 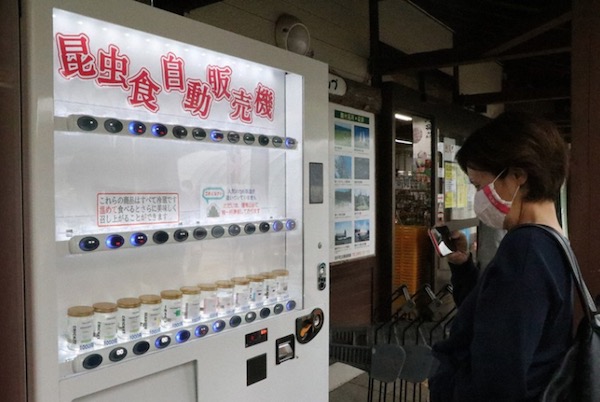 A vending machine offering insects (and only insects) for the public's snacking convenience was recently installed in Nagasaki Prefecture. The machine is run by a Sasebo-based event management company that sells a fine range of deep-fried or dried crickets, grasshoppers and other insects.
photo by mainichi.jp photo by mainichi.jp 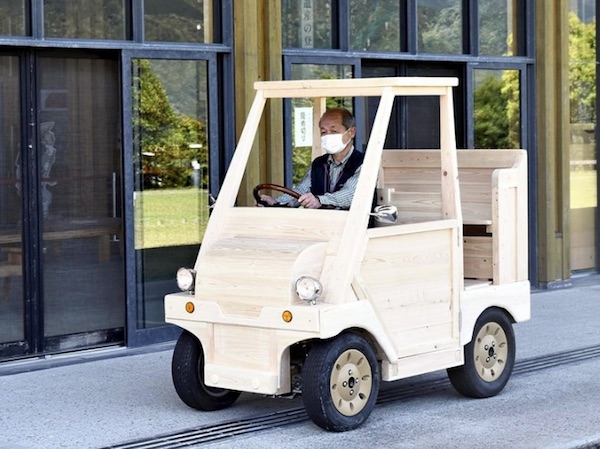 OWASE, Mie — An electric vehicle with a body made of locally produced Hinoki Japanese cypress is on display at the Kumanokodo Center in Owase, Mie Prefecture. The car was made by students at Osaka Sangyo University at the request of local residents. About 2 meters long and 1 meter wide, the car can travel 50 kilometers on a single charge at up to 50 kph. The Kumanokodo Center was established by the Mie prefectural government to collect and disseminate information on the nature, history, and culture of the area surrounding the Kumano Kodo pilgrimage route listed as a UNESCO World Heritage site.
photo by the-japan-news.com photo by the-japan-news.com 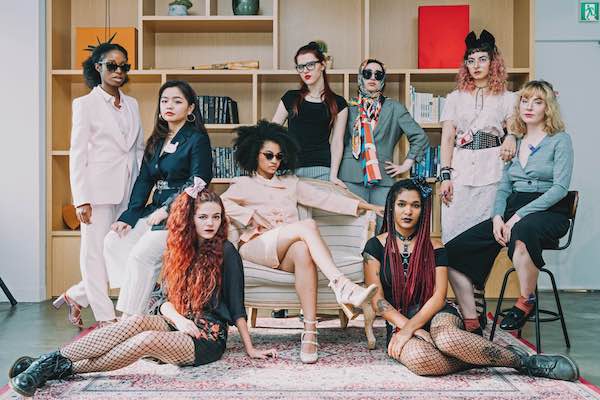 6 Reasons Why I Love Tokyo

Meet The Street Style Maven Who Calls Tokyo Home I wear many hats: Editor-in-Chief, Creative Director, Photographer, Stylist, Hacker of my own website (but that’s a story for another day). I’ve done a lot and continue to do a lot because of Tokyo. I love the city for so many reasons, it’s kind of hard to get them all down but here are a few.
photo by savvytokyo.com photo by savvytokyo.com 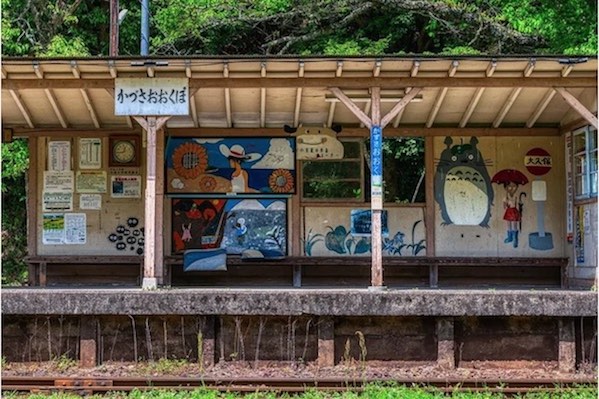 Totoro is probably the childhood magical creature of all children who grew up watching Studio Ghibli films - this oversized furry creature with pointy ears and long whiskers is loved for being gentle despite its size. If you're a fan of Totoro or Studio Ghibli films in general, you'll be delighted to find out that there are actually a handful of dreamy locations in Japan that ooze Totoro-charm! Check out some of our favourites and add them to your Japan travel bucket list. 8 Totoro-Inspired Locations In Japan
photo by @ree.s.mdragon photo by @ree.s.mdragon 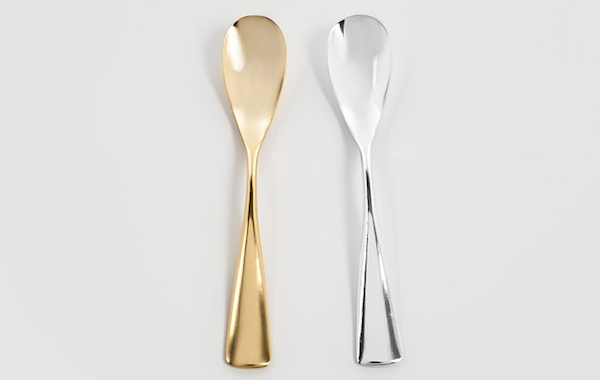 Eat ice cream and butter with heat-conducting spoons and knives

If you are working from home, you may be thinking, "I'm here in the same spot every day and I need a change of scenery!" With summer just around the corner, a cold treat is just what you need! You can go to the nearest supermarket or convenience store, buy the ice cream you want, and eat it while you work to feel refreshed. Mini ice cream cups are a wonderful treat and they make for a great break when you're at work. The only problem is when you take it out of the freezer and want to dig in, only to find that it's so hard you can't even stick your spoon into it. The waiting is so frustrating, especially when your time is limited.
photo by japantoday.com photo by japantoday.com 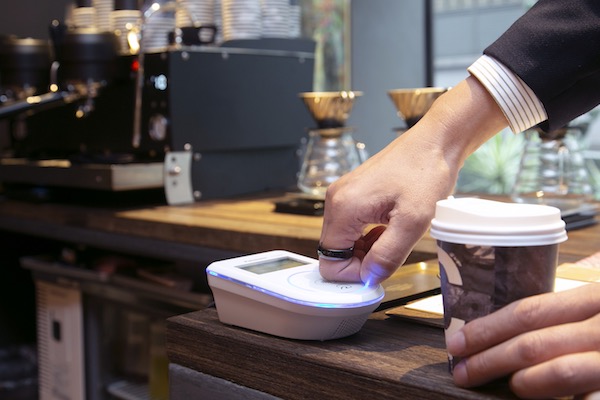 As cashless payments increase, wearable payment ring EVERING takes off for its debut in Japan with a buzz To the global eye, Japan maintains a strong facade when it comes to technology. On the surface, it’s seen as a tech trailblazer with no shortage of sophisticated, revolutionary innovations. For those who have spent time here, however, a different picture emerges. It’s a country that can often be slow to adapt to modernization. This can be seen in the way people pay for items.
photo by tokyoweekender.com photo by tokyoweekender.com 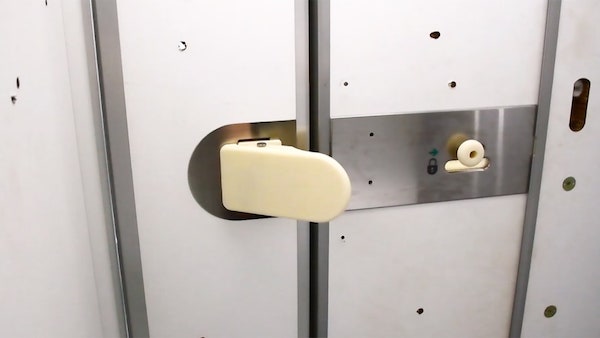 Japanese airline ANA is trialing a new innovation that could make your next flight more hygienic -- bathroom doors that you can open without having to use your hands. The airline will roll out 21 aircraft equipped with the doors across domestic flights in Japan beginning next week. The doors work by having a mechanical spring that allows people to press the door open with their elbows or forearms. The prototypes were created by ANA and JAMCO, a Japan-based company that creates products for the aviation industry, in fall 2020 as a response to the coronavirus pandemic. Until now, though, the only place to try one out was at ANA's lounge at Tokyo-Haneda Airport.
photo by cnn.com photo by cnn.com

Japan's most famous samurai largely emerged from its two most significant feudal conflicts: the Genpei War (1180-1185) and the last years of the Warring States Period (1467-1590). The former war produced the Kamakura Shogunate (1185-1333); the latter series of conflicts culminated in the Tokugawa Shogunate, which then ruled Japan from 1603 to 1868.
photo by Internet photo by Internet 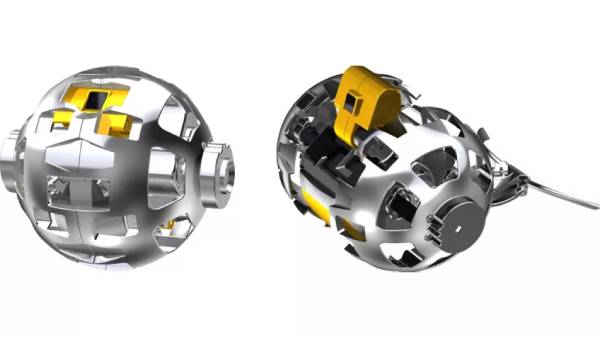 Transforming robot ball to the moon

Japan plans to deploy a baseball-sized rover to explore the moon's surface in 2022. The Japanese company ispace will deliver the small rover to the moon for the Japan Aerospace Exploration Agency (JAXA) using the commercial HAKUTO-R lander. JAXA will use the rover to snap pictures of the moon and collect data on lunar dust — a corrosive substance known to be tough on people and machines, the space agency said. The baseball-sized robot will launch with ispace in 2022
photo by space.com photo by space.com 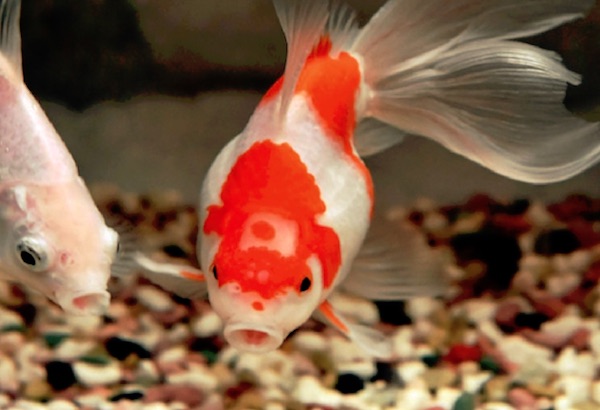 Hinomaru clearly on the head of a goldfish

Kazuko Kawakami (79), a housewife in Uchigoshimachi, Kita-ku, Kumamoto, has a goldfish with a "Hinomaru" -like pattern on her head. "I've been keeping goldfish for almost 20 years, but this is the first time I've seen one like this," says Kawakami.  One of the five animals purchased in Nagasu Town in October 2018. It was about 5 centimeters, but grew up to about 20 centimeters, and it is said that the pattern on the forehead began to appear clearly about a year ago.
photo by docomo.ne.jp photo by docomo.ne.jp 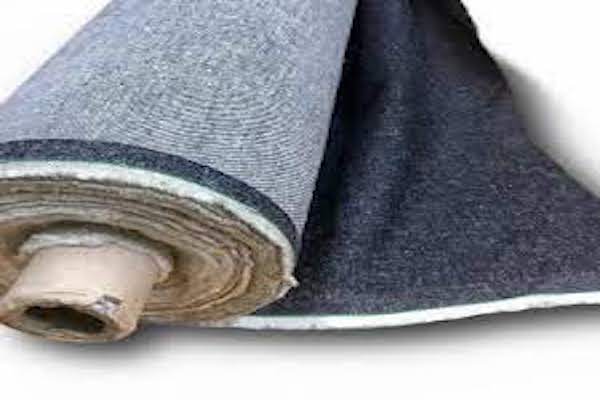 Development of 100% Japanese paper denim fabric The Japanese paper fiber manufacturer "Curetex" will sell jeans made of 100% Japanese paper on the online site from this month's 18th. It weighs about 20% lighter than ordinary jeans and has good water absorption, so it won't get stuffy even in summer. Even though it is made from Japanese paper, it can be washed and used as many times as you like. Previously, the antibacterial and material weight reduction technology adopted by JAXA = Japan Aerospace Exploration Agency for socks for astronauts is utilized.
photo by photo by 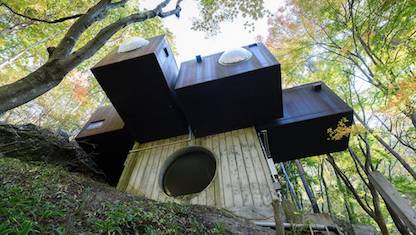 Capsule architecture by globally renowned architect Kisho Kurokawa (1934-2007) is set to be reborn as an accommodation facility as early as this summer thanks to the creative hands of his 55-year-old son Mikio. Capsule House-K, a cottage in the Nagano Prefecture town of Miyota, which was designed by Kurokawa in 1973, is getting transformed into a lodge to accommodate guests. It is composed of a combination of cube-shaped rooms with round windows, which is reminiscent of Nakagin Capsule Tower, a housing complex in Tokyo's Ginza shopping district known as a representative work of the architect.
photo by mainichi.jp/ photo by mainichi.jp/ 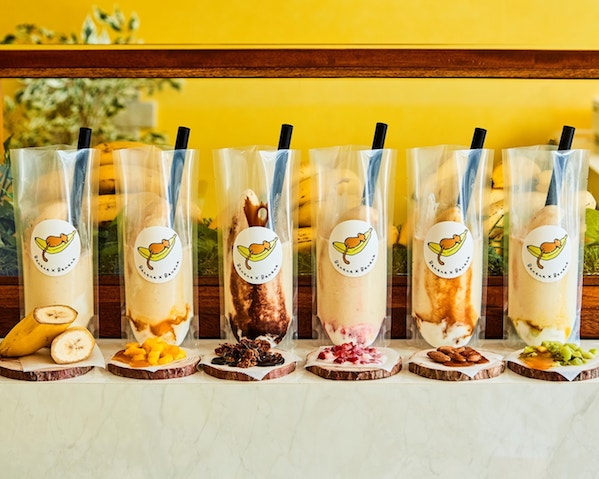 The latest from Shibuya including French extravaganzas, passionate operas and limited-edition merchandise featuring Nintendo’s poster boy   While we may not be attending Ebisu’s Bon Odori Festival (yet to be confirmed), there are still other things to get excited about. The Tokyo Toilet project that gave us the transparent toilets near Yoyogi park is now rumored to be rolling out a number of flashy modern toilets in the Shibuya area. Unagi season is here and it’s brought fresh eels and new restaurants. Whether you’re into smashing bananas like Donkey Kong or practicing your French at Bunkamura, there’s plenty to do this July in Shibuya.
photo by tokyoweekender.com photo by tokyoweekender.com 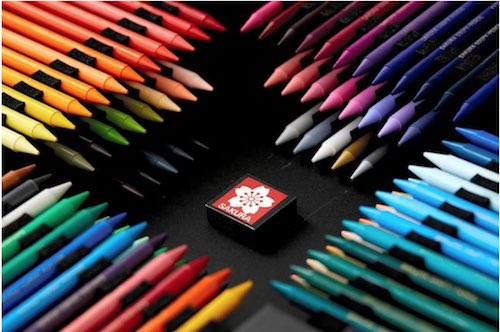 Storied stationery maker Sakura Color Products Corp. based here is celebrating its 100th anniversary by issuing 40 colors usually not sold commercially in a limited made to order set of 100 colored pencils in October. Twelve of the 40 colors such as pearl orange and pearl yellow are specially crafted using glittering pearl pigments for the first time, the company said.
photo by asahi.com photo by asahi.com 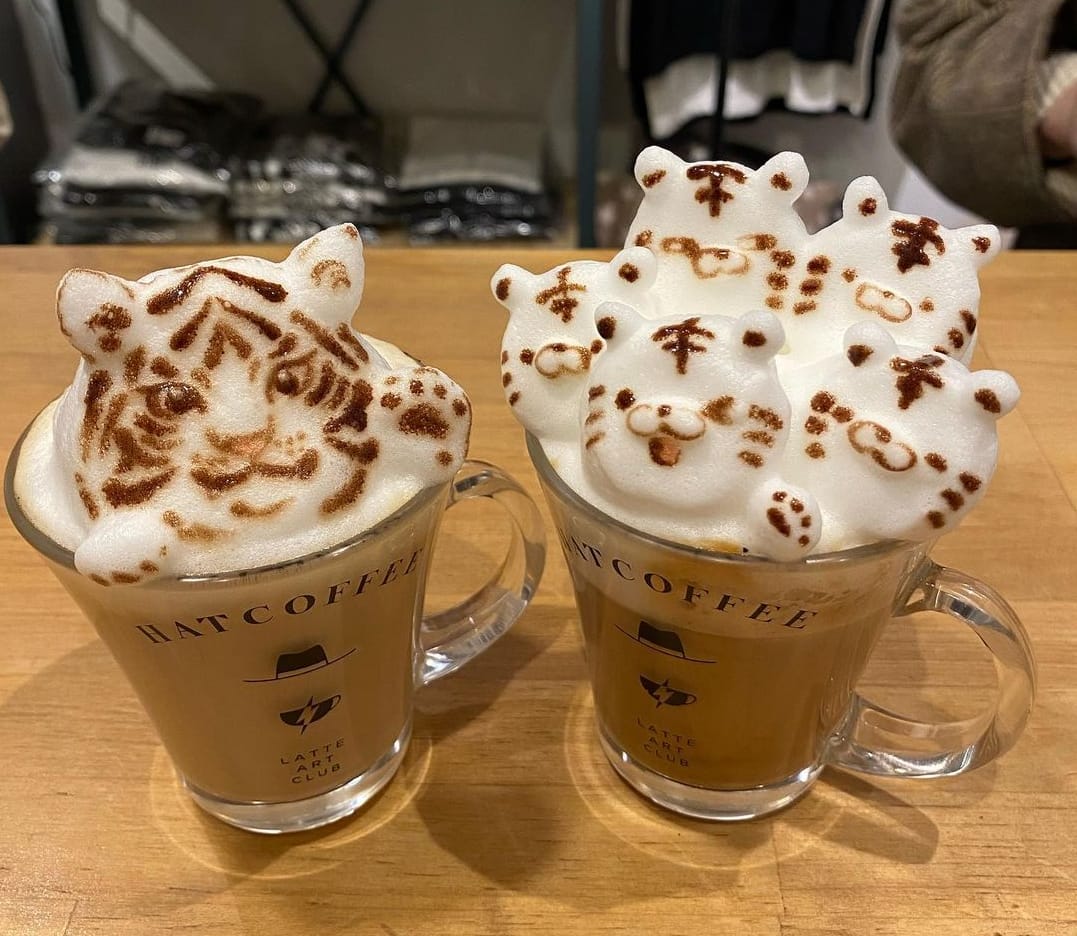 It was just a couple of minutes until foamed milk mountains turned into a Shiba Inu dog reading a Tokyo Weekender magazine. “Here you go,” said Kohei Matsuno, turning around the cup to show me the face of the cute, smiling dog with pink cheeks. Matsuno holds a small stick designed for making takoyaki, but for him it’s a pen for drawing delicate lines with chocolate syrup. The feeling that comes after the initial excitement may be the same for everyone: A huge hesitation to destroy the 3D art so you can drink the latte. Thankfully, the foamy craftsmanship is steady enough to stay in shape at least until you take a flurry of photos and Instagram it.
photo by Kohei Matsumoto photo by Kohei Matsumoto