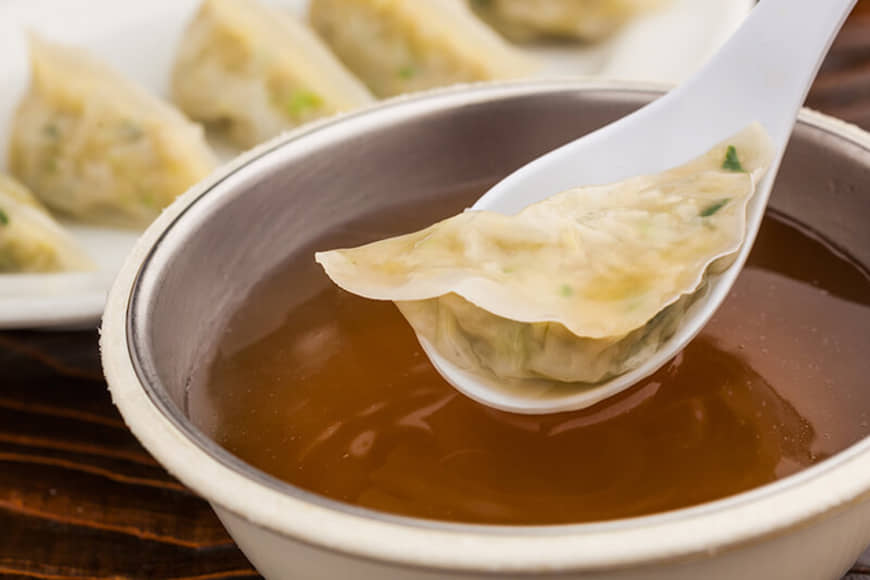 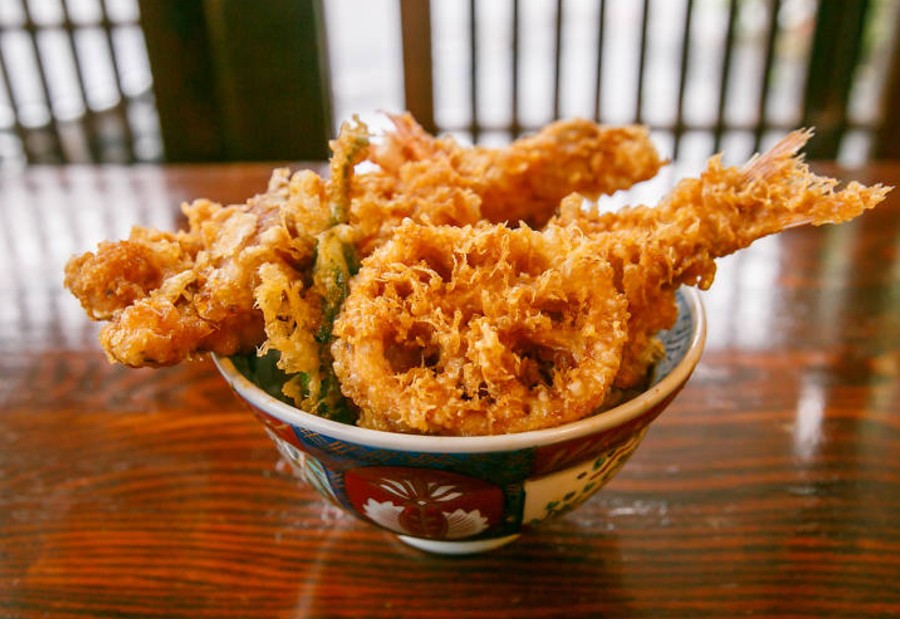 The clue is in the name, a portmanteau of ‘tempura’ and ‘donburi’. Tendon is therefore a bowl of white rice topped with deep-fried seafood and vegetables. Today, tempura has evolved into a cuisine in its own right, with some specialist restaurants charging tens of thousands of yen for an elaborate set menu, yet tendon remains a humble, affordable dish loved by the masses. Made with fresh seafood that's fried in sesame oil (usually) until golden and crispy, tendon is a go-to fast-food when you need something filling and satisfying.
photo by time out photo by time out

Tsukemen means ‘dipping noodles’ in Japanese. The noodles and broth of this ramen are served in separate bowls and you simply dip the former into the latter and happily slurp away. It was invented in Tokyo back in the early ’60s by chef Kazuo Yamagishi; other tsukemen restaurants soon sprung up and the variety grew. Today, you can also find dipping udon and soba. Tsukemen noodles tend to be on the thicker side while the broth is a lot more concentrated in flavour and not as diluted as the typical ramen broth.
photo by Time out photo by Time out 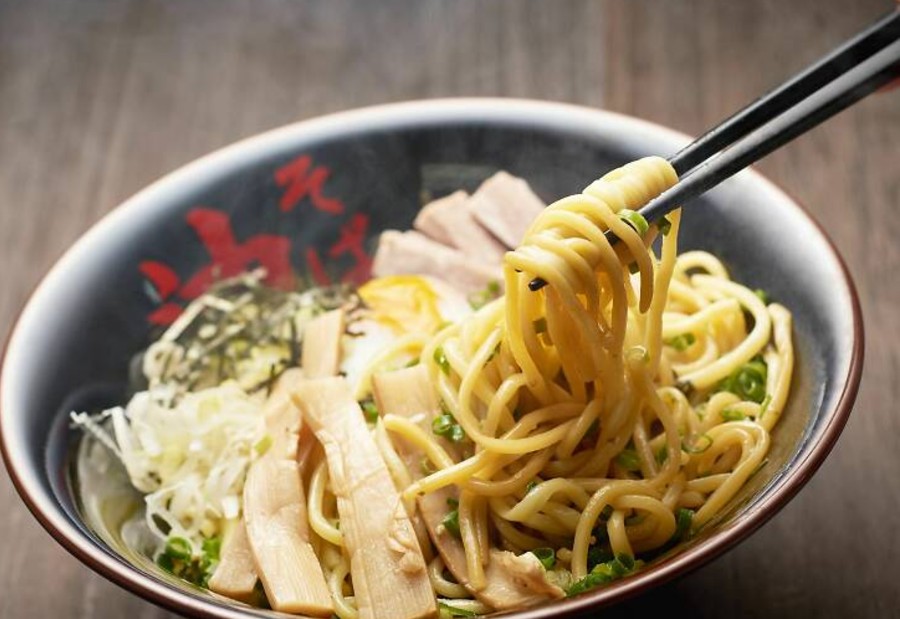 Literally meaning ‘oil noodles’ (don’t worry – they’re less greasy than you might expect), this dish was born around Musashino in western Tokyo. Both noodle joints Chinchintei and Sankou claim to be the originator of this mix of soupless noodles, toppings and vinegar – they both started selling it over half a century ago. Since the dish contains little to no oil, it seems strange that the name has stuck. Some say it’s to differentiate it from tsukemen, some say it’s because there’s some oil in the sauce, but we like the explanation that you’re ‘coating’ the noodles with sauce as you eat.
photo by Time out photo by Time out 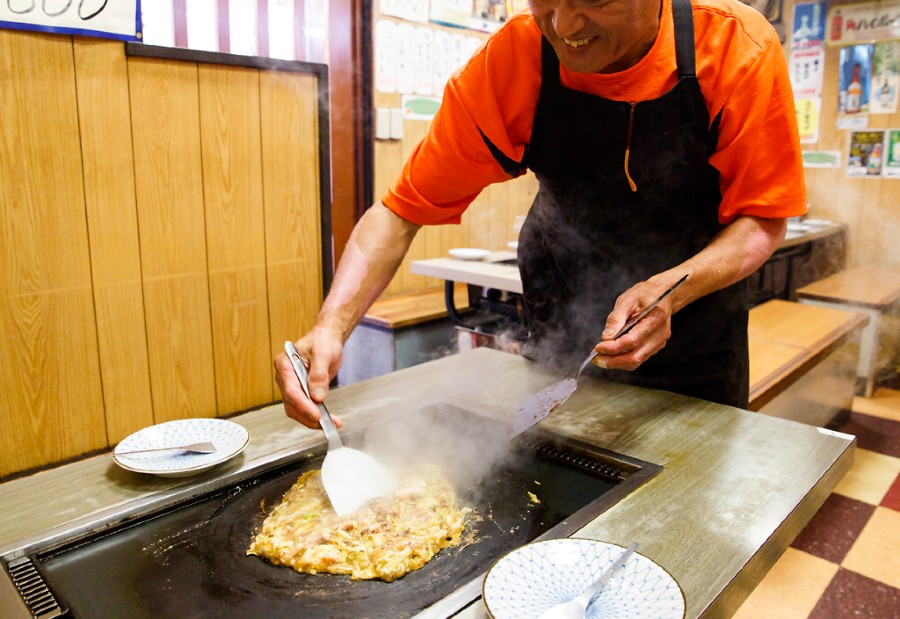 A type of pan-fried batter or savoury pancake, monjayaki is Tokyo’s answer to okonomiyaki, the iconic dish of Hiroshima and Osaka. Monjayaki retains a slightly runny appearance much like melted cheese even when cooked – but the delicious concoction tastes better than it looks. The origins of monja, as it’s affectionately called in Tokyo, can be traced back to a crêpe-like confection known as mojiyaki in the late Edo period. A popularity boom in the 1980s later led to the birth of Monja Street on Nishinakadori in Tsukishima – you’ll find about 75 monja restaurants here today.
photo by Time out photo by Time out 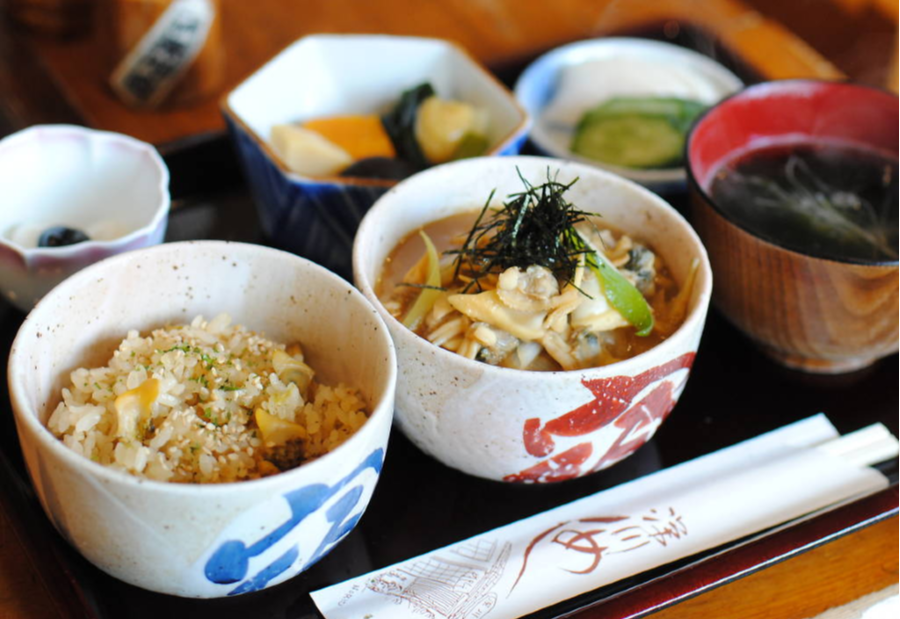 A small fishing town in Eastern Tokyo, Fukagawa flourished in the Edo period (1603-1868), thanks largely to the abundance of high quality asari (short-neck clams) and oysters found in local waters. Back then, the fisherman staple was bukkake-meshi, a broth of clams, green onions and tofu poured over cold rice. As clams were cheap and widely available, this humble dish became popular in the homes of Fukagawa – hence Fukagawa-meshi, meaning the rice meal of Fukagawa. While purists argue that authentic Fukagawa-meshi refers to rice with broth, the term now generally refers to rice cooked with clams.
photo by Time out photo by Time out 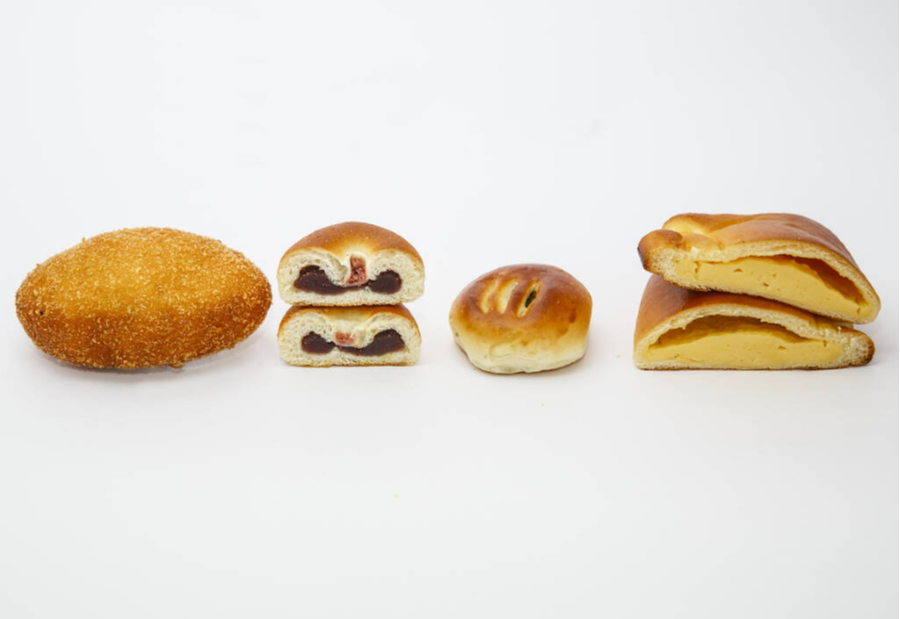 Bread, or wheat for that matter, has a historical significance in Japan. The nation was introduced to bread in the 1850s when the country opened its doors to the West, but it didn’t gain much traction until after World War II. America supplied wheat to feed the nation, and wheat products such as ramen, udon, okonomiyaki and bread flourished. In recent years, bread consumption has exceeded that of rice. As befits a nation of innovators, Japanese bakers have not only mastered the art of breadmaking but also created new breads that have become popular around the world.
photo by Time out photo by Time out 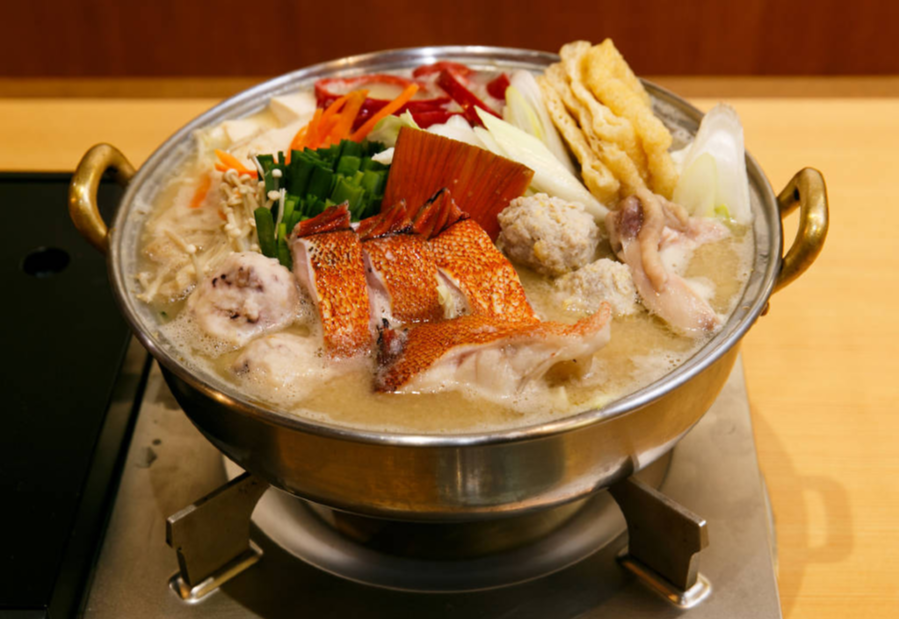 This protein-rich stew is eaten in large quantities by sumo wrestlers during their weight-gaining phase. The soup is usually made from dashi or chicken stock, and the hotpot predominantly features chicken. That’s because chicken is associated with victory: in a tournament a wrestler should, like the bird, always be on two feet (he loses if any part of his body besides his soles touches the ground). However, you’ll also find chanko nabe made with pork to make the soup more flavourful.
photo by Time out photo by Time out 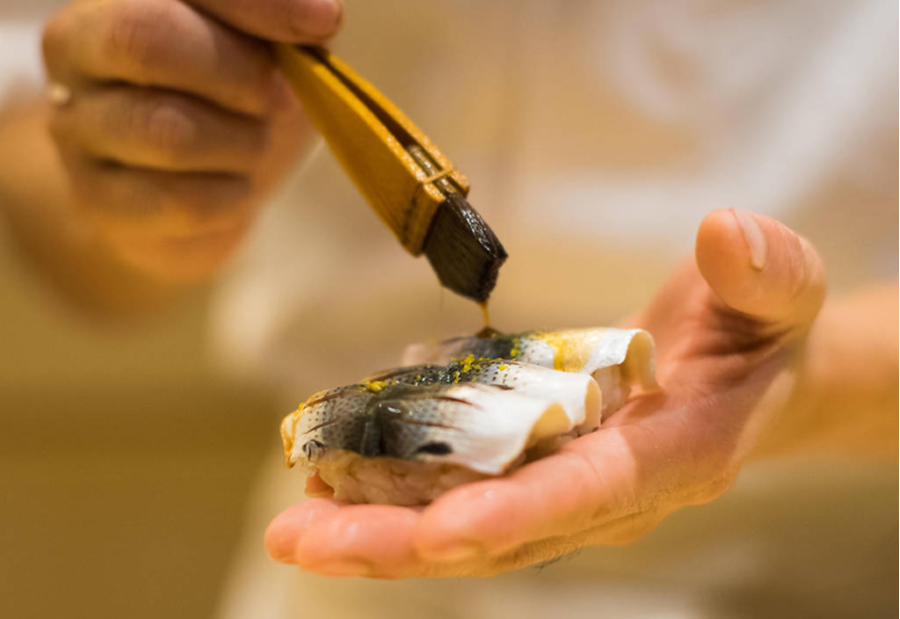 Ask a person outside of Japan what comes to mind when they think of Japanese food and they’ll probably say sushi. In fact, sushi as it’s known today is referred to as Edomae sushi, or ‘Edo-style sushi’. Originating in the 1820s, it was commonly served as a quick snack for Edoites at street stalls across Tokyo, with rice vinegar acting as a preserving agent for the fish and rice. It was Japan’s street food. These days you can indulge in classy (and eye-wateringly expensive) omakase courses at top-of-the-line sushi establishments, eat it as fresh as it gets at the fish market, or go cheap and cheerful at conveyor belt (kaitenzushi) or standing sushi restaurants.
photo by Time out photo by Time out 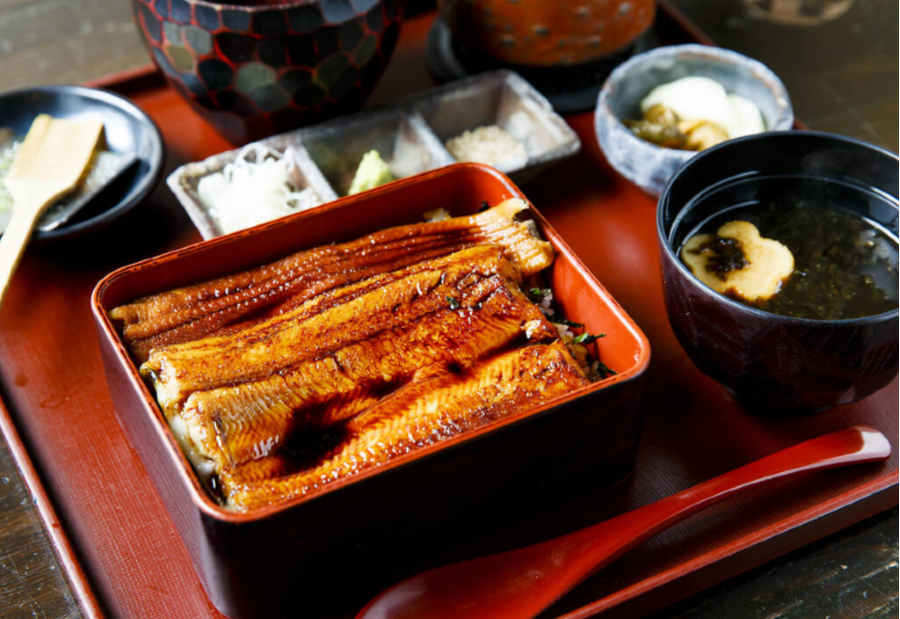 Anago (saltwater conger eel) is the less-fatty, seafaring brother of the more well-known unagi, or freshwater eel. It’s also significantly less rare, with unagi hovering on the endangered species list for years, making anago a more regular menu item. As the fish is native to Tokyo Bay, it has made its way into local cuisine in various guises, enjoyed for its clean, delicate taste. Both anago tempura and simmered anago as a sushi topping are considered Tokyo specialities, but anago is also commonly served in preparations similar to unagi: either with a sweet-savoury kabayaki sauce, or in a plainly grilled style known as shirayaki.
photo by Time out photo by Time out 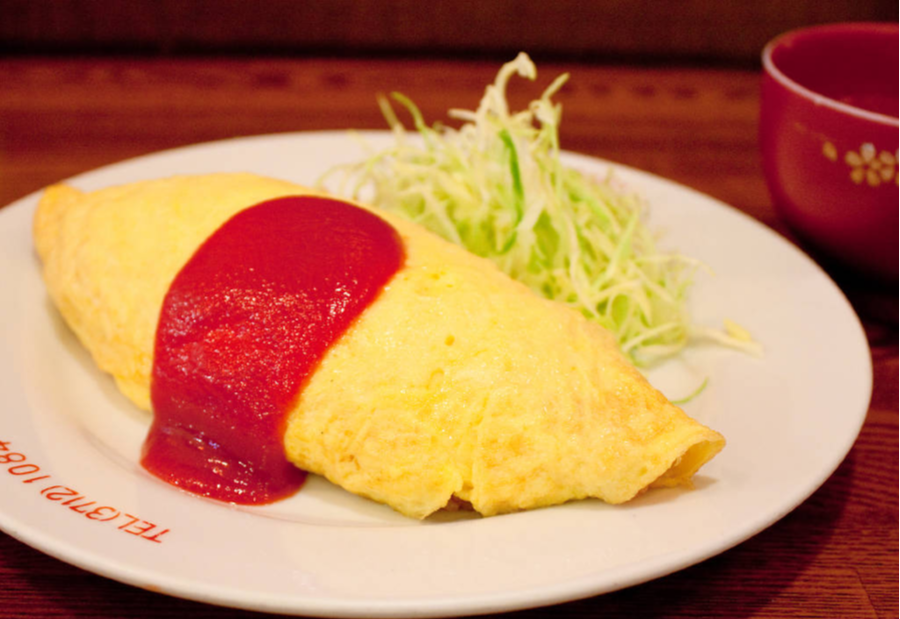 Fried egg on rice is a humble comfort food in many a cuisine around the world. In Tokyo, however, it has been elevated to an artform, with chefs often dedicating years of their lives to perfecting the fluffy, smooth texture that’s the definition of omurice. Rengatei in Ginza is said to be the inventor of this yoshoku (western-style Japanese cuisine) staple back in the 1900s. Restaurants typically offer one of two varieties: fried rice wrapped in an omelette and drizzled with ketchup, or fried rice topped with an oval-shaped omelette, which is filled with a custard-like filling that will cover the rice with a warm, luxurious creaminess once it’s sliced open.
photo by Time out photo by Time out 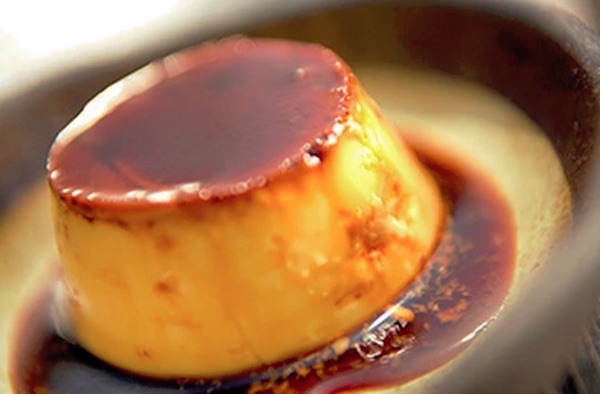 Onsen-steamed custard pudding in Beppu picked as best in Japan

The Jigoku-mushi Purin custard pudding available in the Myoban onsen hot spring resort ranked first among local creme caramels in a survey. It is sold by Okamotoya Baiten. (Provided by Recruit Lifestyle Co.) The Jigoku-mushi Purin, or “hell-steamed custard pudding,” is so devilishly delicious that it topped the list in a nationwide survey on which local creme caramels people most want to buy.
photo by asahi.com photo by asahi.com 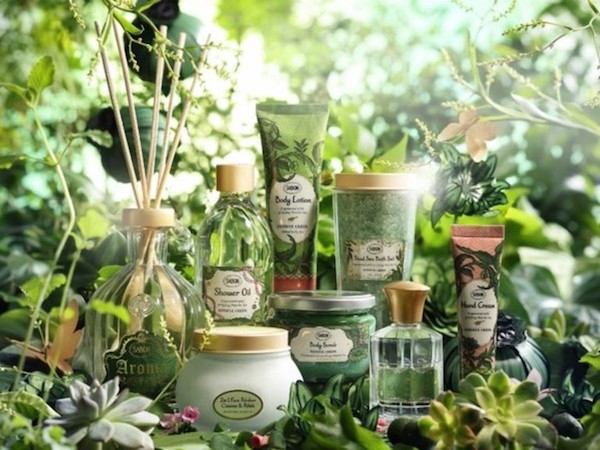 It's hard to walk down the aisles of a Japanese supermarket and not pass an extravagant—at least to an expat American—tea section. Naturally, matcha, Japanese green tea, is at the forefront of the offering. Over recent decades, however, matcha has become noticeably popular in foreign countries as well. Is this the result of pop-culture diplomacy magic by MOFA, the Ministry of Foreign Affairs, or are global citizens indeed recognizing something special? Making matcha Matcha is a type of green tea. It is a powdered tencha, or beverage, made by adding hot water to it and stirring it. As many are aware, the process has been formalized and celebrated. Indeed, tea ceremonies are serene to experience. Readers can see for themselves in the clip below.
photo by japantoday.com photo by japantoday.com 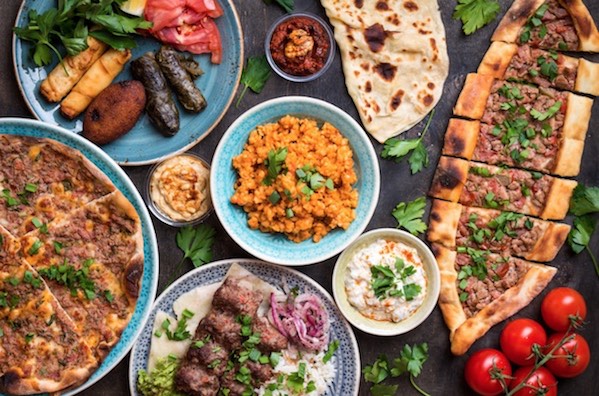 Finding Authentic Turkish Food in Tokyo and Beyond

That kebab is lonely, it's time for you to add more Turkish dishes to your regular menu. Though still not as common as in Europe, kebab stands or trucks have slowly become more and more popular in Japan. From the middle of Shibuya to a stand in a local temple’s matsuri festival, kebab sandwiches and wraps are easier than ever to get. That’s the good news. The bad news is that street food is still just about all the contact that people in Japan have with Turkish food despite the country’s cuisine having so much more to offer. Here are a few places that can offer delicious authentic Turkish food in Tokyo and Kanagawa, and the best news of all is that they all offer takeout.
photo by tokyoweekender.com photo by tokyoweekender.com 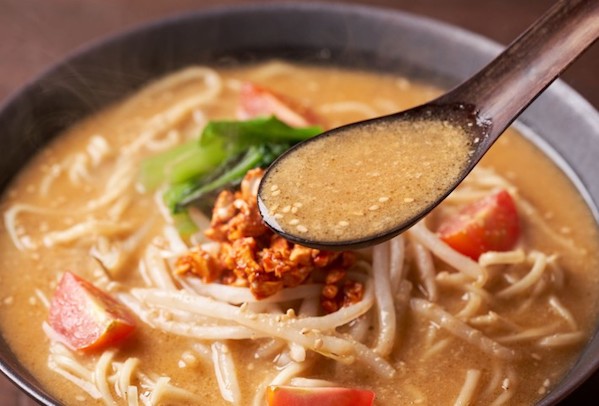 Japanese Michelin-recognized ramen to be released in instant box

TOKYO You can find quite a few bowls of ramen in Japan that have obtained Michelin's coveted Bib Gourmand status (including, of all places, a used car dealership!), but it's not every day you can take that bowl home with you. Fortunately, Soranoiro, a ramen restaurant listed in the Michelin Guide Tokyo's Bib Gourmand for three consecutive years, is making a version of their famous Vegan Tantanmen available for instant packages to cook at home.
photo by japantoday.com photo by japantoday.com 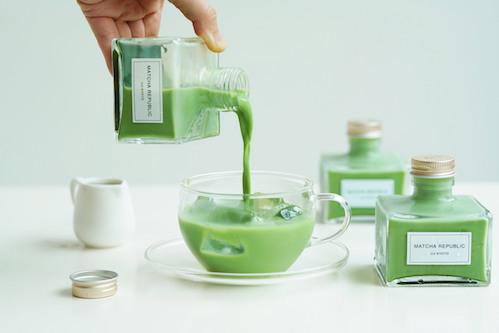 Let’s be honest–everyone is a sucker for beautiful packaging, and Japan is definitely good at it. That’s why this pre-bottled matcha latte drink by Kyoto Uji Matcha seller Matcha Republic has been trending on social media. With a bottle that looks like an ink bottle, this beautiful design is supremely Instagrammable. It’s so popular that it’s sold over 1.5 million units on Matcha Republic’s online store. And now, though it’s usually only available online, for an extremely limited time this beautiful matcha drink is going to be available in a Tokyo department store, together with some gorgeous limited-edition sweets.
photo by japantoday.com photo by japantoday.com 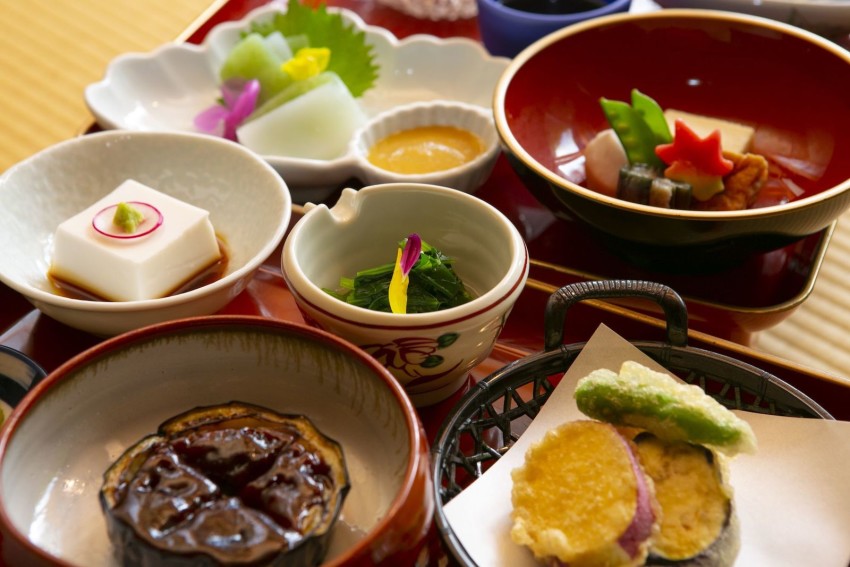 Prior to the outbreak of the COVID-19 pandemic, the number of overseas visitors to Japan set a new annual record of 31.9 million in 2019, the eighth straight year of growth. To help revive this positive trend as global travel resumes, JNTO is promoting the concept of “Universal Tourism”, part of a policy encouraging all tourists—regardless of race, nationality, ethnicity, religion, gender, age, or impairment—to visit Japan and enjoy a secure and comfortable stay. A survey by the Japan Tourism Agency in 2019 showed that eating Japanese food was the activity most overseas visitors looked forward to when visiting the country for the first time, with almost 70% choosing it (with multiple answers permitted). The latest Michelin Guide shows that Tokyo has the highest number of Michelin-starred restaurants in the world – a true culinary paradise.
photo by japantoday.com photo by japantoday.com